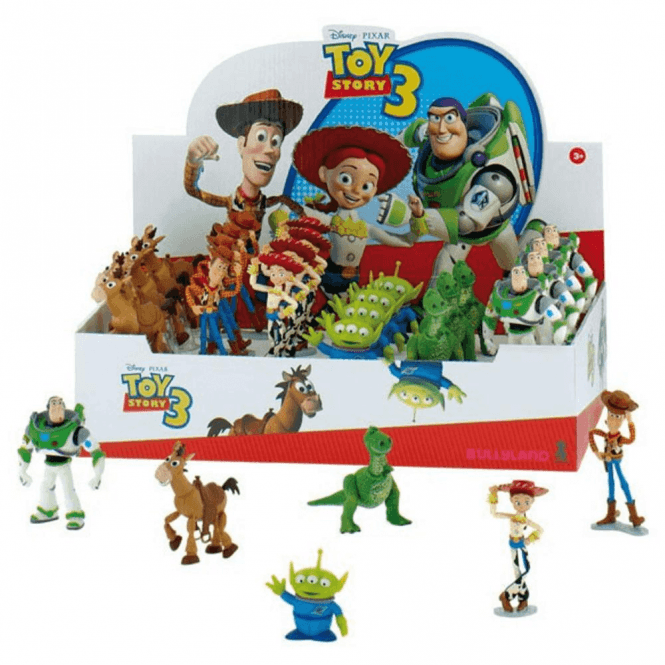 Bullyland Disney Woody a Sheriff cowboy doll from the 1950's in Toy Story. Woody who was Andy's favourite toy until Buzz Lightyear comes along. This causes a great deal of friction between them, but after many adventures together they become close friends. He usually acts as leader of the gang.

Bullyland Disney Jessie the cowgirl doll from Toy Story. She joins Andy's friends and becomes part of the family. Jessie is a fun girl and is always willing to help others, although she is a little clumsy. Buzz Lightyear develops a crush on her. All the toys have many adventures together Jessie is the one who helps save the day.

Bullyland Disney Bullseye the loveable horse from Toy Story.Bullseye is kind with a sensitive nature and loathes to fight. All the toys have many adventures together.

Bullyland Disney Rex the green dinosaur from Toy Story. Rex is an excitable sensitive dinosaur. He suffers from anxiety and he worries about not being scary enough. Buzz Lightyear helps Rex to roar louder which boosts his confidence.

Bullyland Disney Alien, the little 3 eyed green man from Toy Story. The Aliens are first seen in a claw machine worshipping 'The Claw'. They are one of the most popular characters, known for saying 'ooooh' in unison and eventually become the adoptive children of Mr Potato Head because he saved their lives and are eternally grateful.

Orders are despatched from our warehouse Monday to Friday (excluding Bank Holidays). All the below options are based on orders placed before 4pm (GMT) Monday to Friday. If you order after 3pm or at the weekend, your order will be despatched on the next available working day.