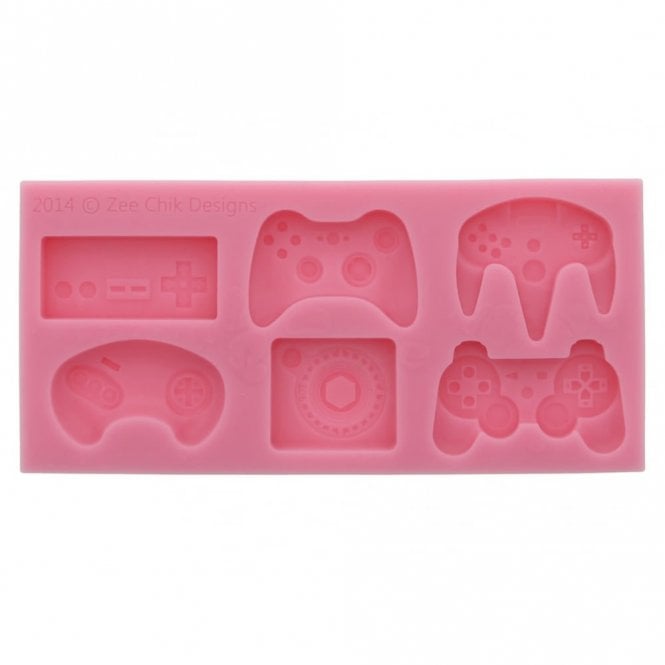 Code:
+ In Stock Now Item in Stock Item out of Stock | Usually dispatched within 24 hours
Loading...

You will need a paste made from flower paste and sugar paste (fondant) to make the moulded pieces - or add Gum Tragacanth or Tylose Powder (CMC) to the sugar paste. The paste needs to be well mixed, smooth, and free of cracks. Sprinkle cornflour or icing sugar into the mould and then tap out the excess to prevent the paste from sticking to the mould.

As all Zee Chik Designs moulds are so highly detailed, you must take significant care in order to fully fill the mould and subsequently remove the paste. To remove the paste with greater ease, freeze for 15-30 minutes. If the paste is stuck to the mould, you can sm

Now you can eat your favourite game console controller - or create a heartwarming treat for any gaming enthusiast’s birthday - with this almost lifelike silicone mould from Zee Chik Designs.

Using this mould, you can create realistic and intricately detailed mini-game console controller replicas from mediums such as flower paste, sugar paste and more!

You could use this particular mould to create cake decorations for personalised birthday cakes or simply individual treats for Christmas surprises.

Zee Chik Designs’ moulds are recognised for their extraordinary depth of detail which allow you to quite simply produce realistic replicas of the objects that the mould designs are based upon.

Even with such detail in the silicone mould designs, you’ll still be able to easily clean this mould.

Each game console controller design of this silicone mould from Zee Chik Designs measures between 3.1cm and 4.7cm in width, and 2.1cm and 3.6cm in height.

For a video tutorial on how to use this mould to create your game console controllers, see the video embedded on the left side of this page.

Browse our range of colourings for making these console controllers extra realistic!

Please take note of the following:

Changed your mind? We offer a 100% Money Back Guarantee on our returns except for edible products. This, however, is only available for UK mainland customers. This also excludes additional delivery charges that were made to send to you initially. You can contact us within 7 days upon the arrival date of your order. Please note the following:

Item/s must be new, unopened in their original packaging, and in a saleable condition. It must also include your invoice order number. Your request will then be processed within 14 working days. Upon return of the item/s, The Cake Craft Company will investigate and you will be contacted within 14 days of receipt. If you contact us outside the 7 day period upon receiving your order, there is nothing we can do to proceed with your request.

Please note: ribbon cutting service (after being cut are no longer refundable)

Please note: Edible printers will lose their warranty if you use edible icing sheets with the printer

Send your inquiry to orders@cakecraftcompany.com.